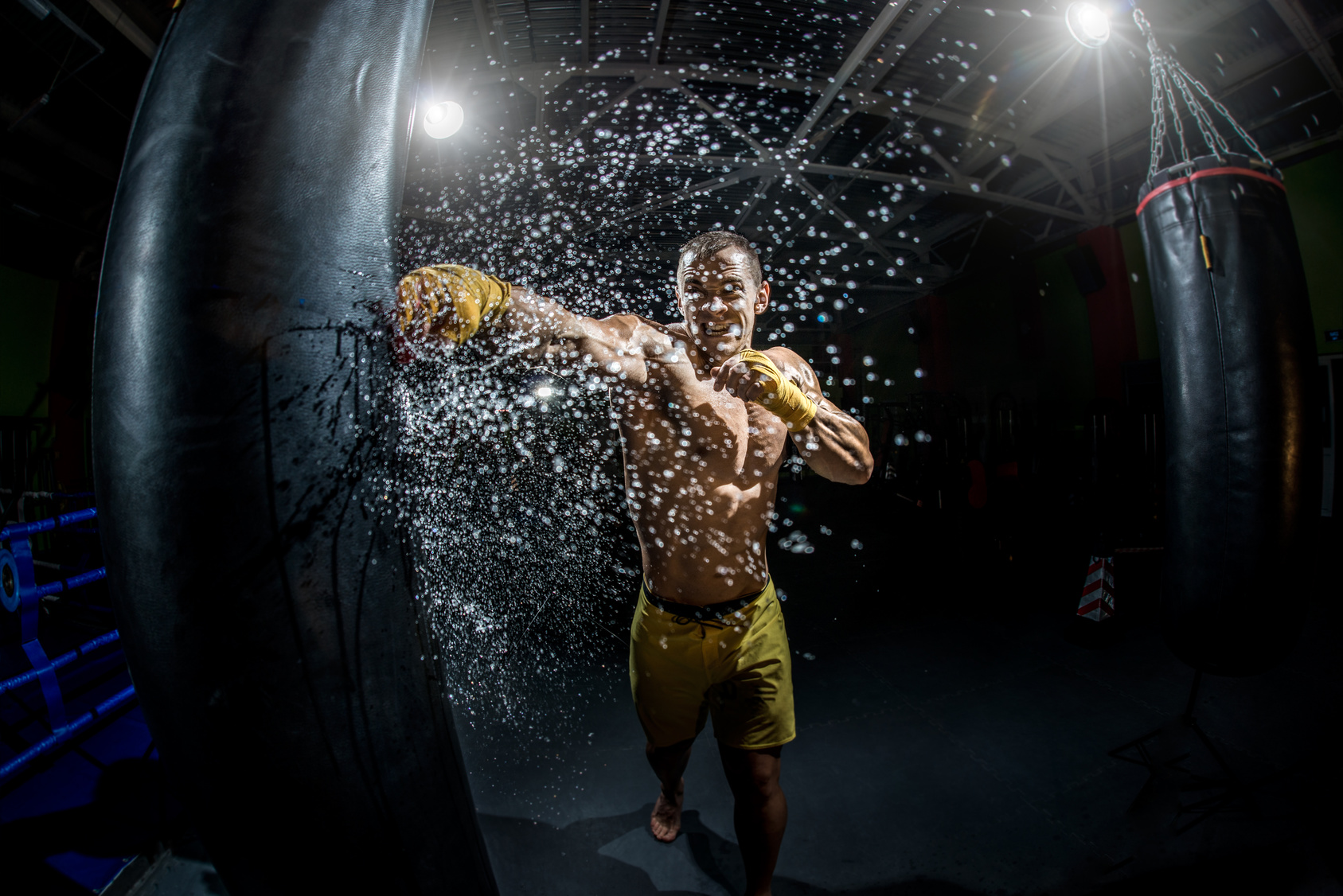 In boxing, they say that “speed kills,” which is why most beginners would kill for some speed. If you’re one of them, you’re in luck: today’s post is all about improving hand speed. Read on to 5 learn mental and physical training tips to help boxers of all levels get faster on fight night!

The Sweet Science of Throwing Punches

“Throwing punches” is a common phrase used to describe the act of punching – who knew it was also an important mental cue that can increase your hand-speed? Science says so:

At least one study has confirmed that golf, baseball, hockey, and boxing all involve similar “throwing motions” (Bejan et al., 2013). This tells us a lot about punch mechanics, particularly about the amount of tension involved (or the lack thereof). When you pitch a ball, your arm is relaxed, which allows the body’s momentum and rotation to transfer power into the throw. Similarly, your punching arm should stay loose like a whip until the moment of impact.

This young man would throw a mean right cross.

Beginners often muscle their punches, confusing the extra effort for speed and power. In reality, tension only slows the punch and disrupts the transfer of force. If you need to see it to believe it, step outside and try throwing a tennis ball with your arm flexed.

Keep a relaxed “throwing” cue in mind as you approach your next boxing training workout; if you’ve been pushing your punches, you’ll find yourself throwing faster, and for longer.

While this cue is great for beginners, it’s also invaluable for boxing veterans who tend to overthink their technique. Experienced fighters trying to improve their speed sometimes just need to stop getting in their own way. Rather than overanalyzing your hip rotation, back foot drive, or shoulder torque, focusing on the broader concept of “throwing” or “whipping” will free your trained body to move optimally. Instead of slowing yourself down to run a mental checklist, you’re running on instinct and one step closer to the “flow state.”

Speed Up from the Feet Up

The secret to fast hands – and even to boxing success, some might say – is fast feet. Improving your foot speed lessens the time it takes to shift and transfer weight, which means power punches, slips, side-steps, and angle changes all get off faster. And because fast feet help you get in position to punch sooner, you increase the odds that your shots land first – even if your hand speed stays the same.

Foot speed training is huge in mainstream sports, which makes it easy to find free video resources online. A quick Google search will give you endless options for drills you can incorporate into your next boxing training workout.

Having said that, I am a big fan of ladder drills. Here is a demonstration from Boxing Fitness Factory:

You can find agility ladders on Amazon, but chalk or tape outlines on the floor work fine.

Speed As A Skill

While old-school trainers have sometimes not done enough cross-training, preferring to get fit and fast with sparring and bag work alone, new-school trainers occasionally do too much. It’s a big mistake; as valuable as complex training, foot speed drills and core work are for boxing speed, nothing beats good old mechanical efficiency.

In other words, cleaning up your punch’s delivery will increase its speed, even your training isn’t demanding other physical adaptations associated with getting faster. As Kimm & Thiel (2015) found in their study when measuring the velocity of jabs, there is a direct correlation between experience and hand speed, so get drilling!

Core training is crucial for speed and power in boxing, as well as general injury prevention and creating stability in all movement. The core is a critical link in the body’s kinetic chain; in Infinite Intensity, world-class boxing and fitness trainer Ross Enamait calls it the body’s “most valuable transfer agent” (p. 166). The faster the core transfers energy from our feet to our hands, the faster the punch is delivered. Of course, a stronger core also improves defense, making evasive movements quicker as well as literally adding “armour” to the midsection.

So we know the “core” is important, but what is it, exactly?

We all know the six-pack or rectus abdominus, which extends from the pubic bone to rib cage. Aside from its aesthetic appeal, its function is trunk flexion, pelvis stabilization, and increasing intra-abdominal pressure. None of these things are directly related to hand speed, but boxers around the world still fixate on this muscle, spending hours hammering out thousands of crunches each week.

Some of my favourite rotational strength exercises include:

Drop me a line for e-coaching advice if you need additional help incorporating these exercises into your overall routine.

Be sure to include other core exercises to protect against muscle imbalances. Some general core training keystones include:

Complex training refers to the integration of strength training and plyometrics. As Matthews & Comfort (2008) state, it involves “the use of contrasting loads to elicit an acute enhancement in power output” (p. 12). In the simplest terms, complex training means following a strength lift with an explosive movement, like performing 5 box jumps after a set of 5 barbell squats. Another common example is performing 10 medicine ball chest-passes after a set of 5 barbell bench presses. Research has shown that your performance on the explosive set will increase after proper loading with the initial strength exercise.

So how does complex training work?

Essentially, the strength lift is “priming” the body for more explosive activity in the second set. The initial set activates the nervous system and “turns on” the fast-twitch muscle fibers required for speed. This allows the plyometric movement to target the maximum percentage of fast-twitch fibers, which enhances the training effect. Matthew and Comfort (2008) cite numerous studies that show this training model improving power production, as measured by longer medicine ball throw distance and faster bar movement in bench presses.

Adopting complex training principles can help us trigger physical adaptations that increase our general speed and power, which should in turn improve our punch speed.

So how do we implement this into our boxing training workout?

First, understand that heavy loads are optimal for this protocol (Matthew and Comfort, 2008, p. 12). Successful models used up to 85% of the participants’ one-rep max (1RM) for 5 reps before the power exercise (p. 12). For our purposes, this load should be decreased as much as possible; we want just enough stimulus to create “post-activation” effect, but not enough to fatigue us and hinder performance on the second set. I recommend between 65-85% of 1RM depending on the structure of your program and your current fitness level.

Next, we must have proper rest intervals, both between the two exercises, and between sets overall. Of course, rest will vary based on your fitness level, goals, and the weight used. That said, the literature recommends resting long enough after the strength exercise that your body is recovered but still “primed” (p. 12-13). Waiting too long will waste the priming effect, while rushing to the next exercise will hinder your ability to “explode.” Matthews and Comfort (2008) recommended up to 3-4 minutes of rest between each exercise, but acknowledged that as little as 30 seconds was adequate in some cases. Start with lighter weight and longer rest, and scale up gradually. Having said that, Matthew and Comfort (2008) admitted that this was a relatively new area of study, and much of their research involved experimenting with different cable/dumbbell/bungee cord set-ups to find angles and positions with “high mechanical specificity” (p. 13). Don’t be afraid to experiment a little on your own; I’ve had great success tying resistance bands to my squat rack and throwing kettlebells/medicine balls in my backyard!

As a final note, please do not rush into complex training as a beginner. In the same way that you should build an aerobic base before incorporating sprint and interval training, I highly recommend adhering to a general strength program first. Eventually, you can incorporate plyometrics into your strength training, before exploring complex training principles as an advanced athlete.

Like power, speed is something you’re blessed with. However, while you may never be the next Husain Bolt, even those without the genetic makeup of an explosive athlete can get faster with proper training and technical improvement.

link to 5 Boxing Elements That You Should Work On

Continue Reading
link to Exercise Equipment For Home Vs. Gym Membership: Which Option Is Better?

There are a few things you need to have in mind when making the decision between exercise equipment for home and a gym membership. The first is cost. A gym membership can be expensive, especially if...